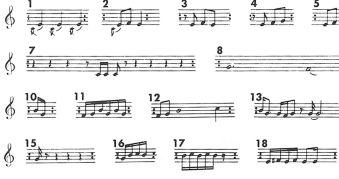 Part of the score of Terry Tiley - In C

This participation project by ChampdAction was very successful in the past seasons and was performed in numerous larger and smaller Flemish towns and villages. In 2007, it will be performed once more, in collaboration with the music academy of Ypres. The performance will take place
at the Lakenhalle in Ypres.
In C by Terry Riley is one of the rare contemporary compositions that can be performed by amateurs/students without compromising its artistic qualities. The duration of one hour is quite long for students who generally are not used to working with such long stretches of time. The immediate experience is very deep and the sense of release at the end of the concert is very intense, for the performers as well as for the audience. Matrix and ChampdAction provide the preparatory texts and audio-material and coach the rehearsal process. For the performance, musicians of ChampdAction join the young musicians.

Listen here to Terry Riley's 'In C' in a version of ChampdAction and the music academy of Veurne (1995):

Watch here the video with some of the highlights of In C at the opening of the new building deSingel on 1/10/2010:

For more information abouth these projects you can take contact with Toon Callier: