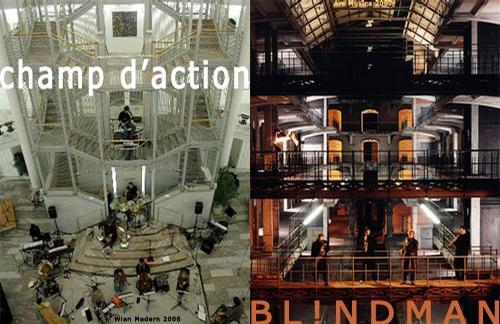 In this programme BLINDMAN and Champ d'Action pay homage to the recently deceased American composer James Tenney.  The ensembles BLINDMAN (Saxophone Quartet) and Champ d'Action (Variable Ensemble for Contemporary Music) are both known for their non-conformist vision of the way in which contemporary music can be performed.  They often seek out special locations or occupy the concert hall in an innovative way.  Lighting and spatial effects move their performances beyond a mere concert in the traditional sense of the word.

In the project 'Critical Band' (named after one of the key works by James Tenney) they join forces for the first time, for the joy of collaborating in the first place, but also driven by a shared passion for the music of James Tenney.  His death in August 2007 barely made the news.  Nevertheless Tenney's name crops up everywhere in the history of American music over the past 40 years.  He played together with John Cage, Steve Reich and Phil Glass, was en influential theoretician, a significant group of composers.  But above all, he was himself an innovative composer, known for his elegant acoustic and electronic works.  He is considered a forerunner of the later European spectralists.

Eric Sleichim and Serge Verstockt, artistic directors of Blindman and Champ d'Action respectively, each wrote a new composition for this project.  In 'Ruisveld' by Eric Sleichim for voice, turntables, electric guitar, brass, strings and percussion, texts and musical fragments paint a slowly shifting landscape of abstract sound.  The musicians constantly trace the boundary between air and sound, friction and tone, breath and language.  The specific quality of their instruments filters white noise as primordial noise into a multitude of forms and creates a white cloud of sound in perpetual metamorphosis.  Silence becomes White noise becomes Sound.

Finally, in 'Twisted Pair' Serge Verstockt uses Tibetan horns and stylophones in confrontation with the Olympics theme song 'We Are Ready'.